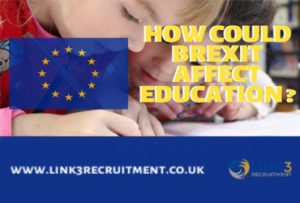 How Could Brexit Affect Education?

Brexit has been a hot topic for a while now, but as we have officially left the EU, the news coverage is plagued with Brexit this and Brexit that. So why not talk about it too? Leaving the EU affects many different sectors, but how could Brexit affect education? Keep reading to find out!

There are many overseas teachers coming to the UK to pursue a career in teaching, which is amazing; we love it when international teachers come into the office looking for work. But, with the UK no longer being a member of the European Union, it could become harder for them to travel and work in England. There are many concerns regarding this and regarding UK citizens wanting to travel to Europe to teach. People want to know exactly which documents they will require when travelling from the UK. The BBC have documented that people’s anxieties revolve around whether they will need a visa to get into the EU. They have stated that you will still travel freely with a passport until the end of the transition period, 31st December 2020. This applies to UK citizens going to the EU and EU citizens coming to visit the UK.

After transition, tourists from the UK will be allowed to visit EU countries for up to 90 days in every 180 days without a visa, but they will not be allowed to work or study. If they are from the UK and want to live in a European country, they will need a Visa and if they are from a European country and would like to live in the UK, they will also need a Visa. People will also need to follow the individual visa rules of each individual country.  Another concern is whether people will require a new passport following our departure from the EU, in short, the answer is no. Your current passport will be valid for travel until its date of expiry.

Learning a different language and being bilingual or multilingual has many cognitive benefits, such as: improving memory, problem-solving, multitasking and more. Therefore, learning a new language is very beneficial for children.  The teaching of modern foreign languages could be negatively impacted due to Brexit.  If many of our language teachers are from countries outside of the UK, problems may arise. It may be harder for them to live and teach in the UK for reasons mentioned previously. If the number of foreign language teachers decrease because of a post Brexit UK, it will be become much more difficult to replace these teachers and it will also become more difficult to recruit for.

This blog has highlighted some of the concerns regarding the relationship between education and Brexit. However, we are still in a transition period, therefore nobody truly knows what will happen afterwards. Just like politics in general, it is a waiting game.

If you are interested in working with Link3, or require further information, don't hesitate to contact us.